Niagara Industries Inc., originally applied for and was granted a U.S. patent (#8150246) for its "tankless water heater assembly." This design was the main feature has been the integral part of its flagship line of Titan Tankless Water Heaters. This core technology has now been strengthened with the added intellectual property protection of having this technology patented in China under patent# 2012800703824

Niagara Industries is celebrating a mild stone in 2017. Over three decades ago Niagara Industries opened its doors for the first time. One man's dream of manufacturing and selling a whole house tankless water heater started in a small warehouse in Miami 32 years ago. Today our Titan Tankless Water Heater are knows all over the industry and out designs have formed the basses of how many tankless water heaters are built. We continue to more forward presenting new products and we thank all our loyal customers for three decades  of patronage.

November 27, 2014 Niagara Industries Inc will be at the International Builders Show in Las Vagas, Nevada Jan. 20-22

Niagara Industries will be showcasing its newest design patented digital control system for the new Titan-SCR4 Series of electronic tankless water heater. For those attending we will be at booth S2264 with product information and new product release designs. For more information you can visit the go to: www.buildersshow.com

On April of 2015 the National Appliance Energy Conservation Act will come into effect. One major change is that electric tank water heater 55 gallons and up will only be sold in a heat pump configuration to meet the requirments. For more information visit: www.energy.gov

The new No Lead/No Lead law will go into effect January 4, 2014 requiring plumbing products to be certified "Lead Free" by laboratory testing. Niagara Industries is one of the first companies to have its units certified. Tankless water heater manufactures will have to conform to this law. 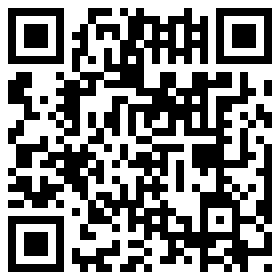 Product information, technical support, installation instructions and more are now available on your smart phone. Just log on to our website or scan the code and go. 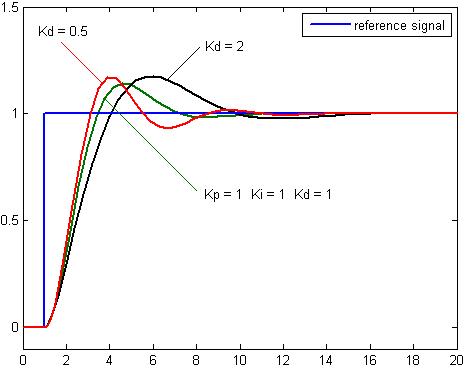 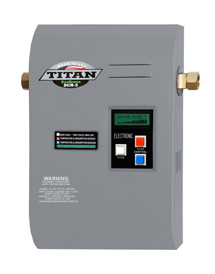 The Titan-SCR3 Electronic "Digital" Tankless Water Heater is the state of the art in Titan tankless technology. Unlike other units that display setting the Titan-SCR3 goes far beyond that. The new Titan-SCR3 system displays real time usage and efficiency information to the user. There is no more guessing, now you can know what amount of power (Voltage, Amperage and even KW) you are actually using from your Titan-SCR3 Electronic Digital Tankless Water Heater. Also the unit will display outlet water temperature.

Niagara Industries Inc is proud to announce the opening of its second manufacturing plant in Miami. This new facility will enable us to increase our manufacturing capabilities and expand our development efforts. This state of the art facility allow for multiple production lines to be run as well as a research, development, testing and prototyping sections. This facility is a key part of our corporate expansion plans and will assist our company in meeting our strategic goals for 2010 as well as increase our marketing campaign capacity with a constantly growing customer base. The plant has already gone on-line as of April 12, 2010 and has created many new jobs that are needed in the community. Further more we have entered in an joint venture with one of the three largest appliance manufactures to build a tankless water heater line for them. January 4, 2010, Niagara Industries Inc celebrates its 25th year in business. 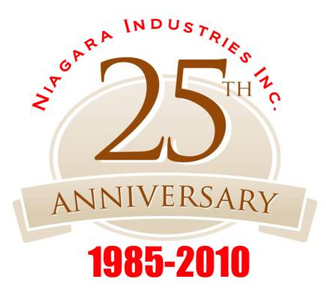 Niagara Industries Inc., is celebrating a monumental moment, 25 years in business. In a time when companies barely make it to 5 years we at Niagara Industries Inc, feel proud to be celebrating our 25th year in business. This could not have been done without the dedication of out staff and employees. Their dedication to the design, quality and performance of our Titan Electronic Tankless Water Heater has allowed us to reach this anniversary. We would like to take the opportunity to thank all our clients, customers and friends for helping us to reach this quarter century and we look forward to continuing to supply your tankless water heating needs for years to come.

The UN Global Compact's ten principles in the areas of human rights, labor, the environment and anti-corruption enjoy universal consensus. The Global Compact asks companies to embrace, support and enact, within their sphere of influence, a set of core values in the areas of human rights, labor standards and the environment. Niagara Industries Inc, is proud to have been selected and joins the ranks off hundred of other companies around the globe to ensure a prosperous future for all. Click here 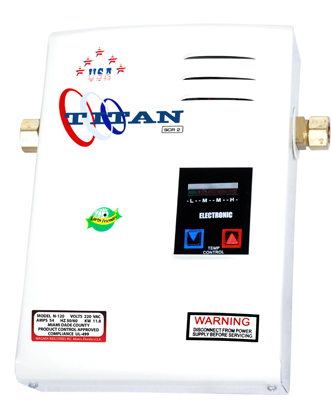 The new Titan®-Digital Electronic Tankless Water Heater is an amalgamation of years of research and development into the understanding of what people want and expect from a tankless water heater. The Titan Digital microprocessor monitors usage and automatically adjust its power to give the user a constant temperature and at the same time it optimizes itself to use as little power as possible increasing its saving potential. This is all made possible due to Niagara Industries new TEMPLOGIC™ Technology. This technology is designed by us and is unique to all our Titan Electronic Tankless Water Heaters. The new Titan-Digital is a user friendly, highly advanced electronic tankless water heater built and designed in the USA and backed by the strength of a proven company like Niagara Industries Inc.

The Titan® Electronic Tankless Water Heater was chosen to be installed in South Florida's first " affordable green home" The ribbon cutting was made by the mayor of Miami. The homes builder and designer envisions building many more homes like this to deal with the increase in electrical cost and to protect our environment.

In meeting the increase demand for larger volume showers and with the increasing cost of natural gas and propane. Niagara Industries Inc introduced it newest model the Titan-SCR4. This unit is designed for northern climate and also for large homes that only have one tank installed and retrofitting to install two would be cost prohibitive. The Titan-SCR4 utilizes 3 heating elements and it is more powerful than some 4 element units on the market. The Titan-SCR4 will be a great addition to the family of Titan Electronic Tankless Water Heaters.

Niagara Industries Inc., has just completed a 6 month joint project with N.A.S.A. (National Aeronautics & Space Administration), S.A.T.O.P. (Space Alliance Technology Outreach Program) & The Thurston Co., What has emerged from this collaboration is the next generation of High Speed Electronic Integrated Circuitry. Some of this new technology has already been implemented in our Titan-SCR2, Laser & Laser-SH models. These new advances will revolutionize the future of electronic tankless water heaters for years to come.

We welcome you to view our site and compare for yourself the superiority both in performance and technology of our units to anyone in the industry. Our units have a proven track record and have earned the respect of the commercial, residential and industrial community throughout the world. We feel confident that we will earn your patronage as well. 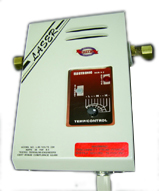 The Laser Instant water heater was designed to handle our growing export market. Manufactured in three models it is specially designed for the Caribbean, Central and South American countries. Its compact size allows for installations virtually anywhere. Also its low power consumption makes it ideal for areas where power is limited. The Laser Instant Water Heater comes with a linear temperature control which makes it the ideal choice for homes with only one water line.

April 18, 1995, Niagara Industries is granted a patent for its tankless water heater 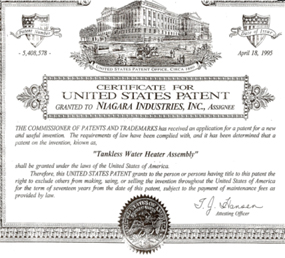 Today Niagara Industries received a letter stating, " The commissioner of patent and trademarks has received an application for a patent for a new and useful invention. The requirements of law have been complied with and it has been determined that a patent on the invention known as tankless water heaters assembly shall be granted under the laws of the United States of America" This date patent.# 5,408,578 (expired) was granted to use and to the units inventor Luis Bolivar. 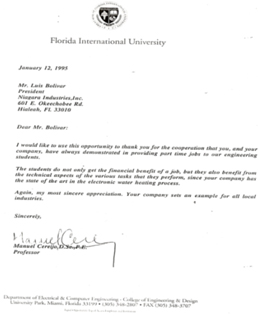 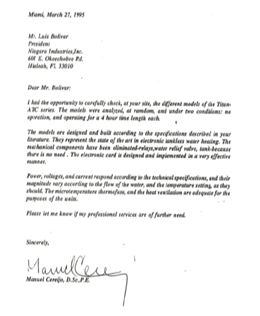 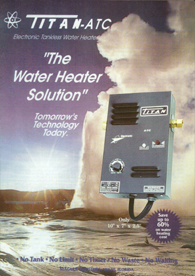 Niagara Industries Inc introduces its newest version of it tankless water heater. The Titan-ATC Electronic Tankless Water Heater. The Titan-ATC carry most of the technology as it predecessor with some design upgrades. The Titan-ATC carries the new air/water differential canalization design built into the construction of the unit. One of the main problems is the failure of heating elements due to "dry starts" This means that air gets into the system, this air enters conventional tankless systems and burns out the element. The new Titan-ATC will bleed out and bypass preventing "dry starts" and premature element failure. 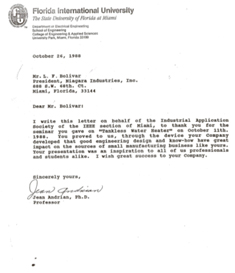 Niagara Industries Inc has submitted its line of tankless water heater to be tested under UL-499 stadards and all models have been approved. With this in hand Niagara Industries petitioned the building department of Dade-County (Which has the strictest building code in the state)We gained approval on all models and we are the first tankless water heater approved by Miami Dade County.

Niagara Industries is invited to give a seminar for the Industrial Application Society of the IEEE section of Miami at Florida International University. The seminar is the first of it s kind and introduce the IEEE society to the technology that is tankless water heaters. 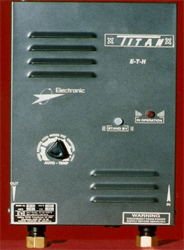